There are some places along the Australian East Coast, like the Whitsundays and Fraser Island, where the backpacker community would say “Did you even do the east coast if you didn’t go there?”. But our next stop was not one of these places, and we were excited to go off the beaten track with a stop at Agnes Water. Our bus arrived in Agnes Water at 2am, and literally dropped us in the middle of nowhere (picture pitch black darkness and an overgrown field). There was absolutely nothing around. Apart from, thankfully, an old lady with a little minibus waiting to take us to our hostel. I remember her trying to engage us in conversation, but we were so disorientated from being woken up in the middle of the night that I don’t remember a word of what she said! About half an hour later (but who really knows), we got to the hostel (we hoped), and the lady directed us down a dark path to our beds where we collapsed for the night in a confused blur…

The next morning we were greeted with beaming sunshine flooding through the windows, and I stepped outside to see where on Earth we had ended up! Phew, we were definitely at a hostel in Agnes Water – tick! The hostel was set in acres of woodland, with hammocks dotted about and little wooden cabins for dorms. It was incredibly quiet and peaceful. We made the most of the free breakfast as a priority, of course, then decided to hop onto the shuttle bus and head into town. ‘Town’ turned out to be a row of about ten shops and cafes on the roadside, just a short walk from the main beach, but still there was a lovely community vibe to the place, and you got the sense that all the locals were like family to one another. I guess this comes from living at the end of the road! 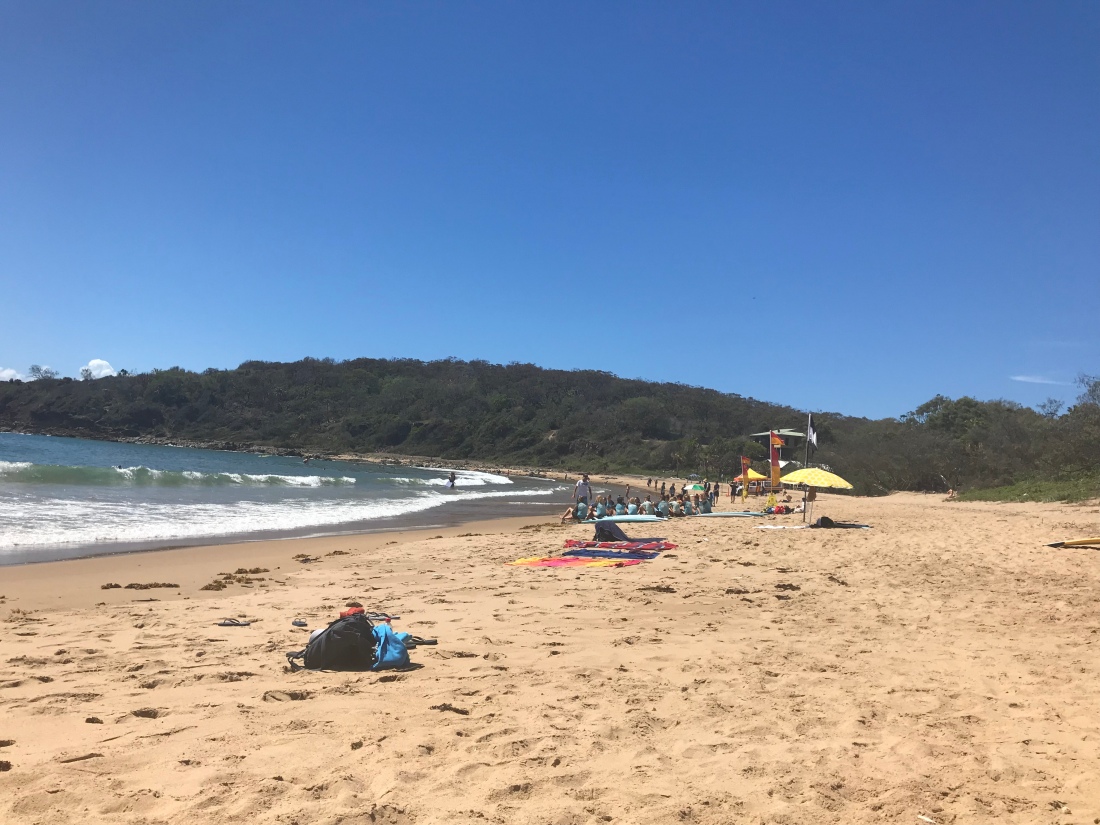 Later on in the afternoon, we popped over to the nearby Kangaroo sanctuary for feeding time. An old man hobbled out to meet us with a bucket full of sliced sweet potato, followed closely by a little swarm of hungry kangaroos ready for their lunch! The sanctuary has been taking in orphaned joeys for 16 years, all of whose mothers were killed in road accidents. It quickly became apparent that the old man had more time for kangaroos than humans (If you want to feel depressed about the human race, then this is the man for the job!). But, on a more positive note, I think he could also win an award for being the most knowledgeable person on the planet when it comes to kangaroos. They really are fascinating animals. Did you know that a female kangaroo can pause her pregnancy for up to 12 months? And that kangaroos chew each mouthful of food at least 40 times, and then regurgitate and re-swallow the bile from their liver (sounds kinda gross) to absorb even more nutrients – talk about efficiency! We got to spend all afternoon feeding these friendly and very greedy friends, and I think we all left feeling like a very inadequate species in comparison! 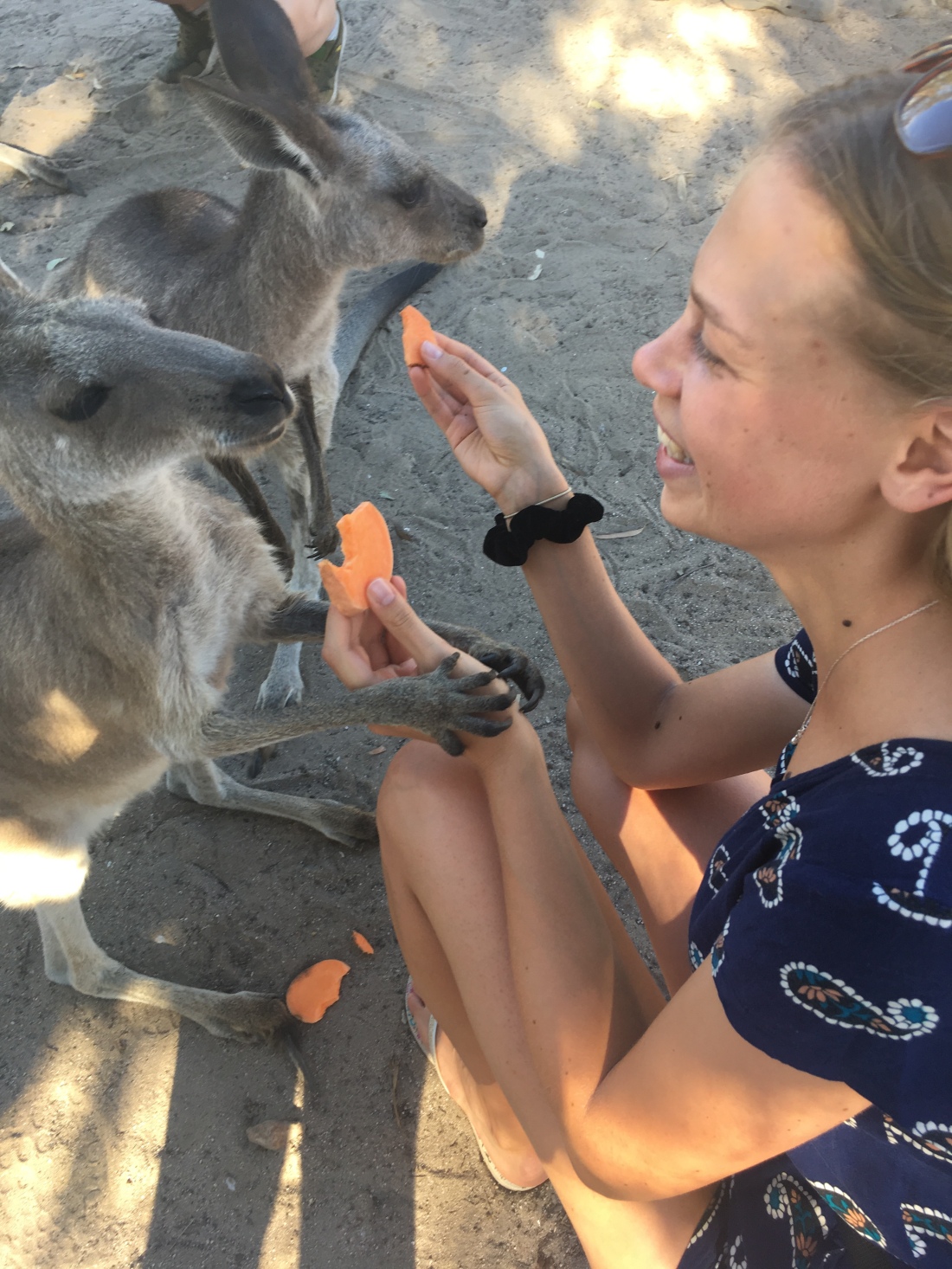 Back at the hostel, Emma and I cooked our standard veggie and chickpea dinner, and spent the rest of the evening playing cards (or rather attempting to remember the rules of card games with varying success) before bed.

Now, the main reason for stopping in Agnes Water was because Emma had heard that the waves are great for surfing and, even better, lessons are unbelievably cheap compared to more touristy spots such as Byron Bay. And she was certainly right (future Aussie travellers, take note)! For just $25 each, you can get a three hour beginners surfing lesson. Today was the day that I would try surfing for the first time, eek!!

Now imagine the most ‘Aussie’ guy you can… and this was who would be taking our lesson today! With blond beach waves, a surf board tucked under his arm, and a permanent “no worries mate” attitude, JD introduced himself as our surfing instructor and it was safe to say I felt that we were in very safe hands! Clumsily picking up our surfboards, we stumbled down to the beach ready for a short safety chat, which can be summarised as ‘Don’t be an idiot in the sea and use your common sense’, before some land training to work on our technique for standing up on the boards – head up, tuck toes, lift chest, back foot, front foot, done. Easy, right? We were ready to take on the waves! 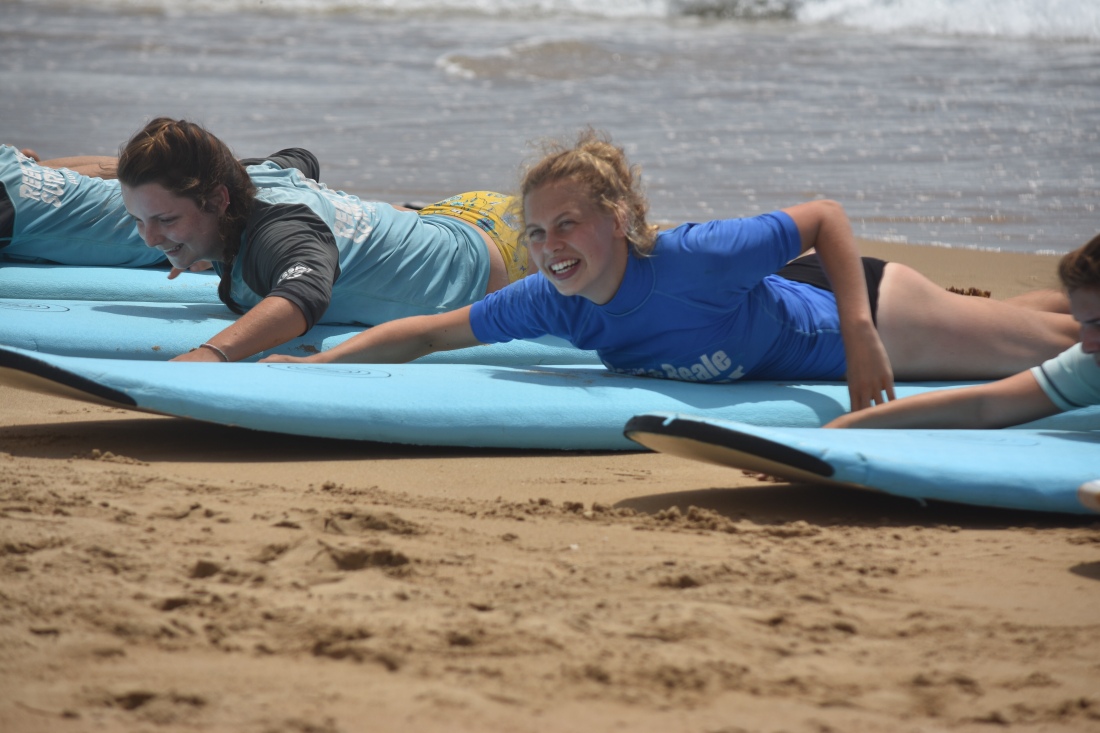 I knew that surfing would be no walk in the park, so wasn’t particularly surprised when, on my first attempt, I performed more of a nose dive straight into the water! But I was determined that by the end of the lesson I would be standing upright on the board, so jumped straight back up and paddled back out to sea. Lo and behold, after a couple more highly failed attempts involving crash landings and head bumps, I managed to get both feet on the board and stand relatively upright for a couple of seconds. It was the best feeling in the world! And round and round we went for the next two hours, paddling out to sea, catching the wave and jumping up onto our boards. And it was SO MUCH FUN! I don’t think we stopped smiling for the entire lesson. 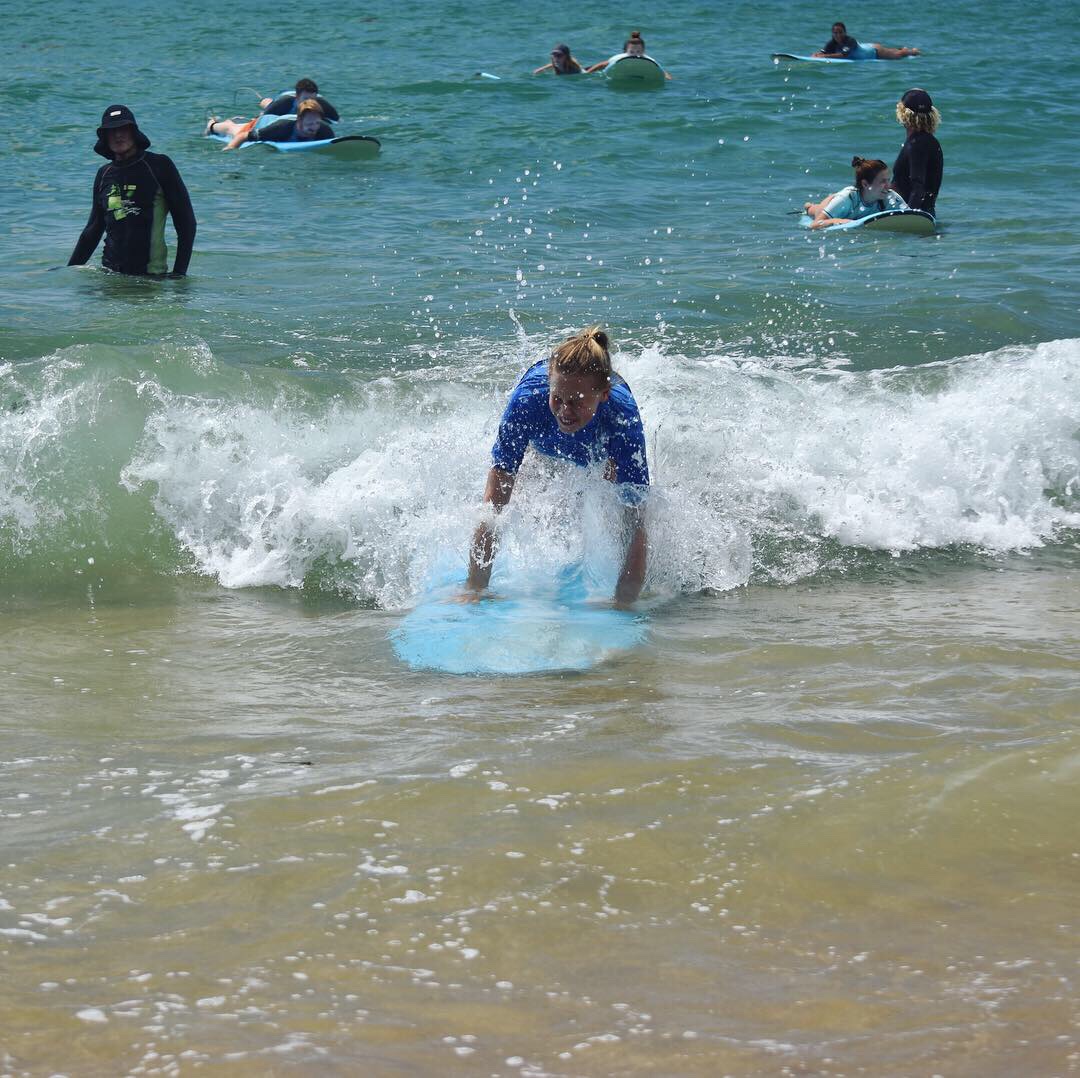 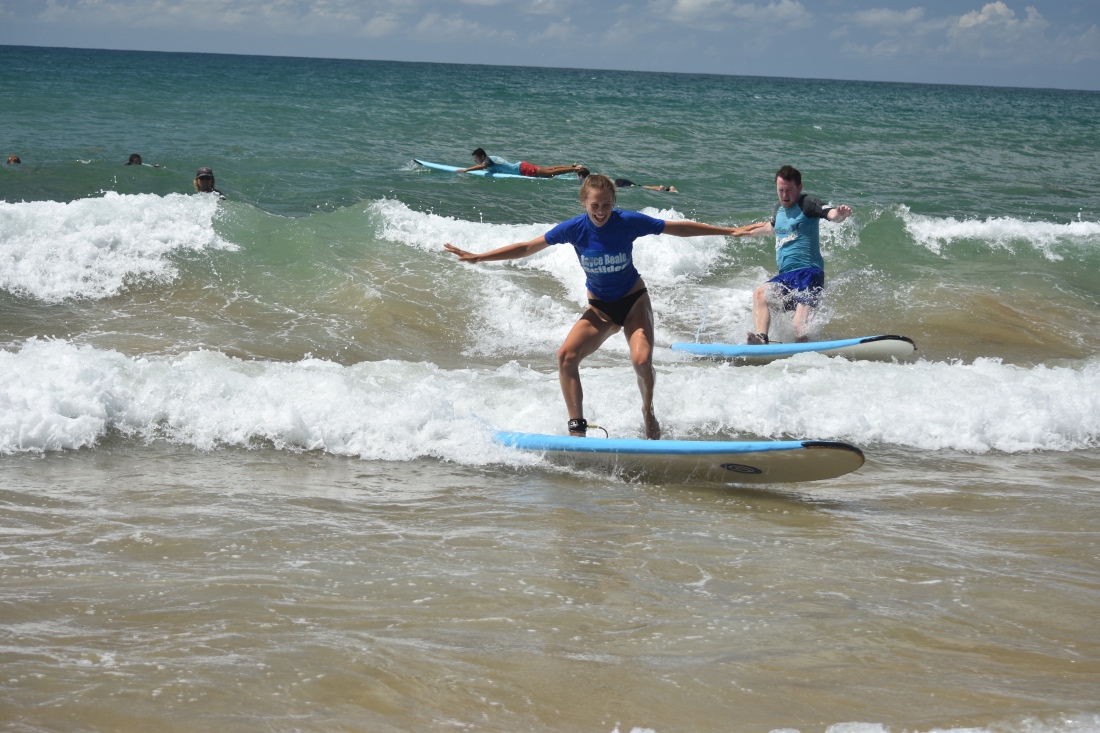 This may have only lasted a couple of seconds, but think it was a good effort considering the guy behind…

We finished the lesson feeling exhausted but buzzing on adrenaline, and proudly went to collect our Level 3 surfing certificates – who needs a BSc when you’re a qualified beginner surfer! The most amusing part was looking through the photographs that had been captured while we were out on the water… let’s just say there were some real gems in the mix that don’t need to be shared! So now Emma and I both want to abandon the ‘Adult Life Plan’ and instead live the surfing lifestyle – there’s no problem with that, right?

Thanks again for reading, catch you later!

View all posts by Flick